I'm excited to finally be able to share this project, since I've been sitting on the photos for a while. 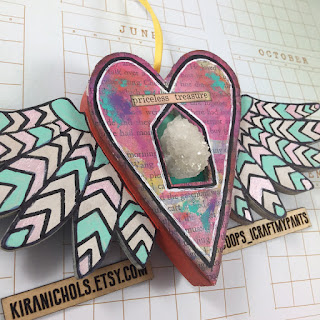 It's a two-sided winged heart ornament for the Mixed Media Valentine Swap over on Craftster. 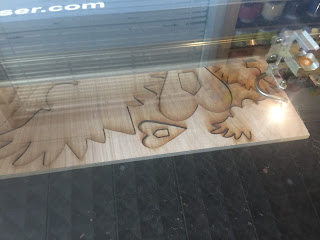 First I drew out the shape on paper, then scanned it into the computer and worked the image into a cut file. Here's a pic of the shapes being cut out on the laser out of 1/4" birch plywood. Having a laser is amazing.... I can make whatever wood shapes I want. It's easily the coolest thing I have. 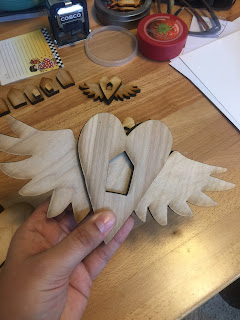 The piece is 3 layers glued together, and has the lil shrine cutout in the front as well as the back. I just clamped the three pieces together with wood glue, then coated it in gesso to make sure the paint and stuff would stick and be vibrant. I guess it's like primering....It might have sucked up a lot of paint if I didn't gesso it first. 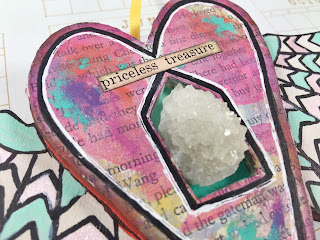 So here is the first side.... It's covered in a gelliprinted bookpage and then painted on a bit more. Then I drew the wings with paint pen and filled them in randomly with pearl pink and mint green. The middle has a quartz crystal druzy, for sparkliness... 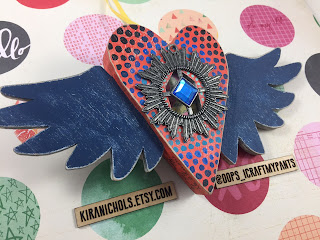 This is the other side and it has a totally different feel. 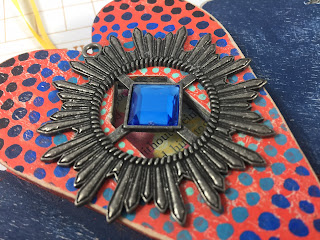 Dot painted, with a coral and navy blue color scheme... The pendant over the shrine hole made the perfect window. I'd had that little metal thing for years in my stash and I'm glad I finally found a good use for it. 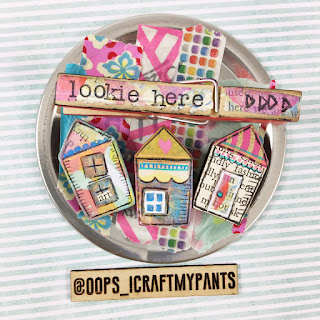 And at the end, there were little house-shaped scraps from where the shrine fronts had been cut out, so I made some wee tiny house magnets for my swap partner, and for funsies, a little altered clothespin magnet, too.

She was happy with the package! The heart was pretty tough to send away, but that's the magic of swapping: trading art and making other people smile.

Posted by Kira - oopsicraftmypants.com at 7:00 AM