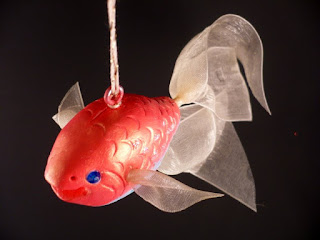 It seems like I've only been making ornaments lately! Not a bad thing, though. Anyway, I saw a giant glittery fuchsia goldfish ornament the size of a taco at TJ Maxx the other week that had super long (like 15") sparkly ribbons for a tail and it was mesmerizing, even though it was ridiculous and way too enormous for any reasonable Christmas tree. I was inspired to make smaller one :) 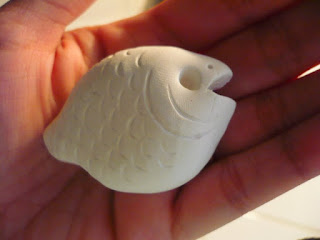 The body is sculpted from white polyclay, then I drilled holes for the fins and the tail and then painted the body first with acrylic craft paint, and then iridescent pigment powder. After it was all dry, I glued in the fins and tail that are made out of sheer 1" wide ribbon. Then I glued beads in for the eyes. The loop for hanging on the tree is attached with a eyehole screw (I think that's what it's called!) 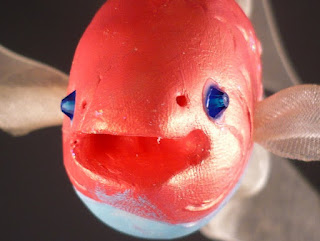 Anyhoo, I hope everybody is having a lovely week so far. Until next time.
Posted by Kira - oopsicraftmypants.com at 1:47 PM

Tis' the season to make ornaments! Love the use of ribbon on this one.

My boys love this! They made me click on the 'little tiny goldfish' said in the cutest voice ever!

You make the absolutely sweetest things!