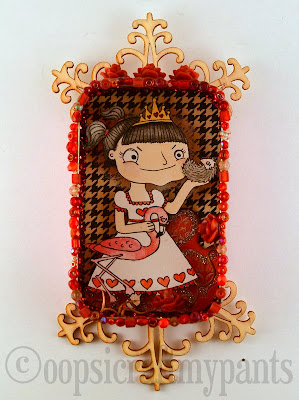 I had the pleasure of participating in another awesome wicked Craftster swap which was themed "Wicked Children." The whole idea was to come up with a list of villains or wicked characters you'd like to see depicted as a little kid. My partner had a pretty awesome list, and I picked to craft a young Queen of Hearts from Alice in Wonderland. 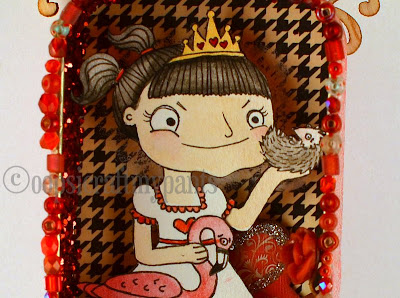 I don't often draw people...So I was a little nervous working on this, BUT I think I captured the deviousness of the little queen as she stews ideas about playing croquet with hedgehogs and flamingos. 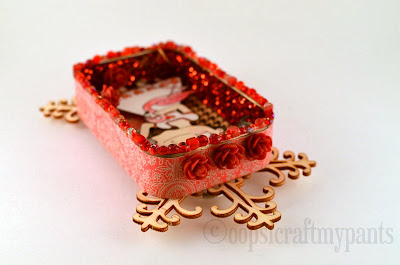 I saw these little resin roses at Michaels and thought they went with the theme perfectly. 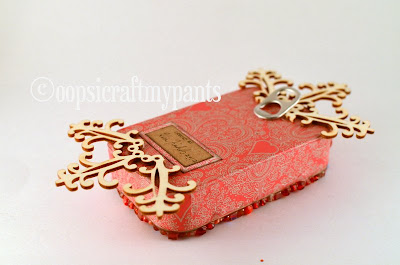 I used a pop-can tab for a wall hanger on the back. 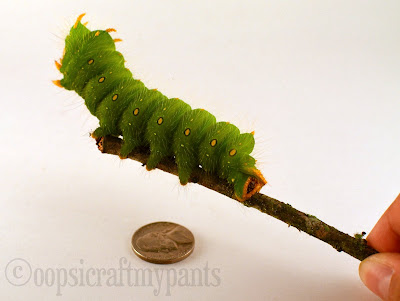 And in other Alice in Wonderland-related news, I found this tremendous monster of a caterpillar in my yard today, on a big toadstool, blowing smoke rings from a hookah. He looked just like Absolem, but green. He refused to be photographed smoking, so I had to make do with taking pictures on a stick. Really though, he's an imperial moth caterpillar and he weighs about 3 lbs.

Just kidding. He was huge, though.
Posted by Kira - oopsicraftmypants.com at 5:52 PM

Email ThisBlogThis!Share to TwitterShare to FacebookShare to Pinterest
Labels: Altered Tins and Things, Painting and Illustrations

I love this tin! And the caterpillar is gorgeous!

Just loving your wicked red queen lol! If I didnt do quilting, I think you would convert me to your altered papercrafts!

Holy Moley!! That caterpillar is amazing. Of course, your tin is also very very awesome :).

Wow, how lucky your partner must be to get this awesome tin art.

love that pop can lid for the hanger!!! great ideal
ava