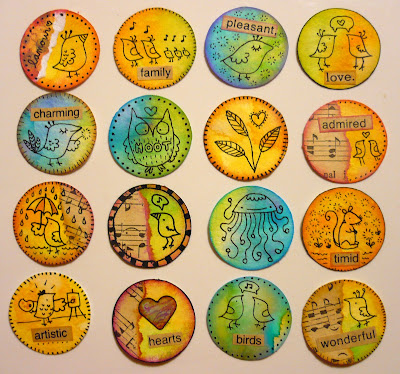 Here are the rinchies I made today, and the last ones I'll be making for a while because my danged 1" circle punch absolutely 100% died today, like broke in frickin' half. 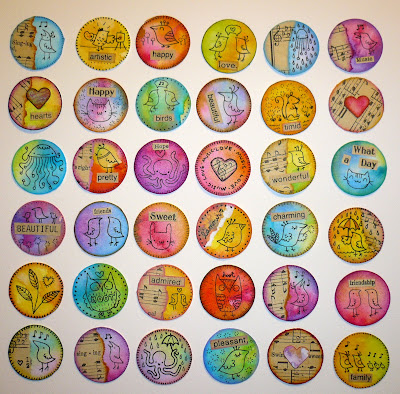 Here's an image that kind of makes me smile, though. Here are most of the rinchies I've made over the last week or week and a half. Not quite enough to fill an 8.5'' x 11'' page though, so I'm not done. Ugh, I've been so frustrated with this dumb broken punch and the dumb brand because I've had problems with just about every Marvy Uchida paper punch I've gotten. 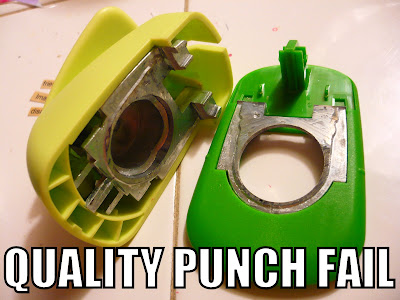 This one straight up broke in half. Both the metal part on the inside broke and the plastic casing snapped. Such a stupid design. In order to punch, you have to put pressure on the whole top of the punch, just like the old school punches with a huge button on the top you press. Only with this, it has a lever, so the weight is absolutely distributed improperly putting a TON of strain on that little joint where the top is connected to the bottom. Okay, given, I punch and papercraft probably 300% more than your average hobby scrapbooker, but I bought this thing like LAST MONTH. It should last much longer than that. I'm also unhappy with my other Marvy Uchida paper punches (the giant heart and tag ones) because the cutting mechanisms have become misaligned(probably due to that same cruddy design) and won't punch all the way through without a fair bit of wiggling. Lame. I also bought the 1'' square punch a bit ago and had to return it almost immediately because there were tiny burrs on the metal cutting mechanism that prevented it from punching completely from the get-go. So frustrating. I'm never going to buy Marvy Uchida punches ever again. I'm sure they're fine for light use, for most people, but I don't qualify as a light user. Why can't things just NOT be crap? Especially my 1'' circle punch, just when I need it most?! Grrrr, rest in pieces, you little garbage.

Okay, thanks for sticking with me through my silly rant. Not sure why, but this little punch failure really affected my temper! Anyhoo, I need a new 1'' circle punch, so the next brand I'm trying is Stampin Up. I hear good things, and they're a little more pricey, so I'm reallllly hoping for better quality. Wish me luck!

Posted by Kira - oopsicraftmypants.com at 10:22 PM

Email ThisBlogThis!Share to TwitterShare to FacebookShare to Pinterest
Labels: inchies

I love your Rinchies! I had a punch break like that. I took it back to Michael's without a receipt. They let me get another one. If you got the punch at your regular craft store they will probably let you return it. I am a regular at my Michael's.

Thanks, DeeAnn! I did buy it at Michael's, but I thought I couldn't take it back without a receipt... I'm definitely going to try now :)

I totally understand where you're coming from- I had bought a button making kit from JoAnn's, granted it was a children's toy, but it immediately broke after carefully following the directions. I took it back and exchanged it for another which, again, broke on the first attempt. It seems like most companies don't care about the quality of their workmanship, they're just out to make a buck. I'm more than willing to pay more for a product that will last for years rather than pay $19.99 for something to break in a matter of weeks.

Stuff like that is totally frustrating!
I just bought a set of sketching pen nibs for my fountain pen. Four of the six nibs didn't work and ink exploded all over my painting. (Two of the four broke in half upon putting them in the pen) >:( I was in tears I was so mad. I will definitely be contacting the company! Sorry to hear about the crappy paper punches! But thanks for warning me about the icky brand :)

Oh my god, I thought i was going insane. I just bought the giga tag one, used it on 2 pieces of paper to see how it came out. Then i decided to use it two days later, and it doesn't go down!!!! it stops right before going through the bottom piece. So it only cuts two corners of the shape. Ugh! Ugh! Ugh! I even put my entire body weight on it and nothing.