*Yawwwwn* I've been staying up so late lately ("late lately" hehehe) waiting for Bobby to get home from work at a horrendous hour in the morning. He tells me that it significantly lights up his life when I'm awake when he comes home, so how can I not? I've been trying pretty hard to stay up, but I usually fall asleep on the couch an hour short so when he comes home I'm completely zombie-like and incoherent, and "cute." Anyways, I am a morning person and haven't been able to sleep past 8:30 AM in the last week, so I'm a tad sleep-deprived...

As mentioned before, I've still got plenty of holiday crafting that is keeping me very occupied, so I think this week will be mainly ATC posts because I still have a backlog of cards I haven't posted yet. My apologies for the lack of variety. 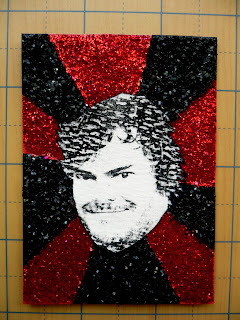 JACK BLACK! He is so funny... I made this one for a swap partner with a mad crush for Jack Black. I don't know if anyone will know what I'm talking about (you score 150 points if you do), but while applying all the glitter, I could not stop humming that bear traps song from Tom Goes to the Mayor. I'll explain a bit: TGTTM is (was?) a cartoon show on Cartoon Network's adult swim lineup with crudely animated xerox-eqsue photographs and largely weird, awkward humor... One episode, Jack Black guest stars with his brother Kyle as two competing bear trap salesmen, who at one point sing a song to convince everyone the town would be safer surrounded by thousands of beartraps. Things don't end well. Anyways, it's a really stupid show, but I kind of like it.

WOW! Super-un-craft-related tangent there! Have a SPECTACULAR TUESDAY!

Posted by Kira - oopsicraftmypants.com at 10:38 AM

Email ThisBlogThis!Share to TwitterShare to FacebookShare to Pinterest
Labels: ATCs

I love it, and have no idea about the cartoon, but have a strange desire to google!

I just LOVE to read your posts, because you have a very loose and funny style of writing that I enjoy very much!