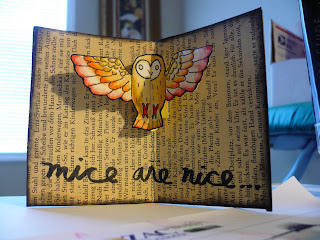 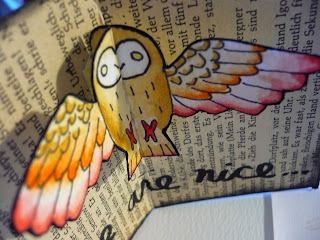 I received a cute little pop-up ATC in a swap and decided to have a go at one. This is what I came up with. I watercolored and cut out the owl, then glued him in the card. It's pretty simple really. 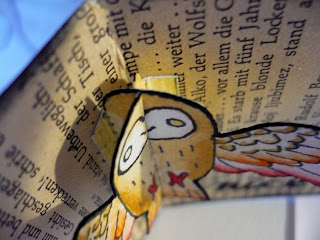 I copied the mechanics of the pop-up from this video and this pdf. It's originally a butterfly, but easily modified for anything. I'll have to use this method a bunch because the effect is so cool! When you open and shut the card, it's like the wings are unfolding. 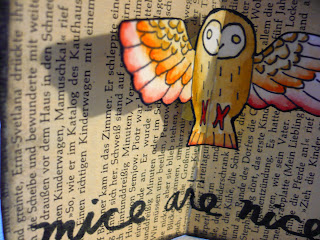 Not bad for my first, right? The alignment could be a little better, but meh. I'm having all sorts of ideas for things that can pop out in this fashion. They don't even neccesarily need to be symmetrical either... Stay tuned, I guess!!

Posted by Kira - oopsicraftmypants.com at 10:48 AM

It's probably because your post is from 3 years ago, but I was sad that neither the videao nor the pdf could be found anymore. . .

Bummer! But thanks for commenting and bringing that to my attention. I had forgotten all about that ATC... I think I can remember the mechanics of it. I'll have to do another post and ATC to show how to do it!