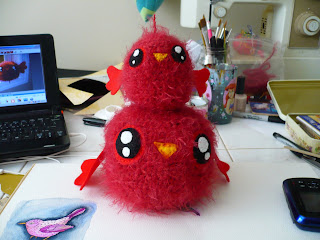 I made a set of these birdies a few months ago, and gave them to a friend for her baby shower recently. There were a lot of other babies at the shower, and they were a huge hit with the babies.... Naturally, someone else wanted a pair. I agreed to make another set! 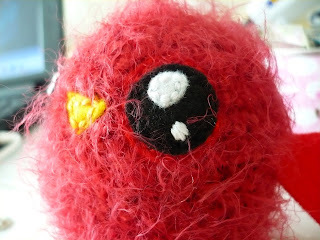 So, I'm farther from wanting to mass-produce these than I was even when I had only made the original set. So hopefully no one else wants me to make more! I mean, I'm flattered and grateful, but I think it may just go against my artistic value system to blast the one-of-a-kind factor of my pieces... Or maybe it's just because I'm lazy. If I do end up getting more requests from folks at church, I'm going to have to figure out a way to sew a similar version instead of crocheting. Bah, I'm happy today.

Posted by Kira - oopsicraftmypants.com at 5:52 PM

That's the cutest thing I've ever seen...I'd like a dozen. Hhahaha