You'll be frozen in carbonite! No, more like epoxy resin. 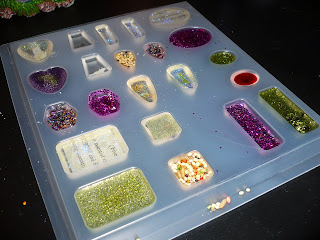 I got my castin' craft epoxy resin yesterday and these are my very first molds! I can say I've learned A LOT from this first batch. 1/2 a cup of resin is SO MUCH FLIPPIN' RESIN. I definitely know not to mix that much again, ever. Before I started, I didn't want to be in a rush while making these, so I planned out all my pendants. I thought I'd have enough for maybe 5 pendants, but it ended up that I had enough for each of the molds, and then another third of what I mixed had to be tossed. 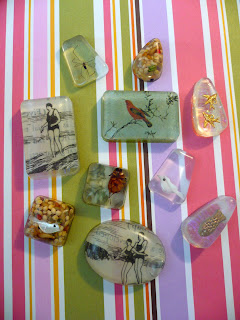 Here are the ones I think turned out the most decent. Most of them were made in a mad rush, trying to figure out what to do with all that extra resin. 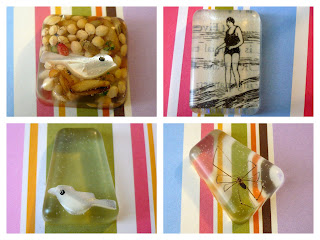 These are my favorites of all of the whole batch. I think the bird in the bird seed is so funny... The dead spider is pretty awesome, because as I was running around looking for stuff to cast, I saw this little bugger on the floor next to my front door. (We let the web-bound spiders live in corners peacefully, especially near doors, because they catch any flies or other pesty bugs that try to come in. [My only gripe is the little spider garbage they leave under the web like dead bugs, old skin and spider poo]... But if they go out of bounds, or if they are the speedy crawly spiders that usually end up in the bathtub, they are DEAD MEAT.) 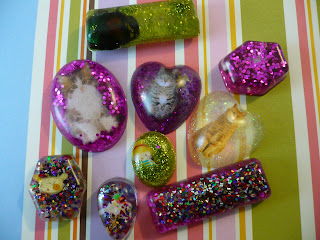 I also learned that I will never again use glitter in resin. It's oh so tempting, but I think my results were simply horrendous and tacky. I think the better part of these glittery ones will end up in the can.

I can't wait to get my hands on some bottle caps, though! I think being able to create the pendants right-side-up will be a big help in getting these to look slightly more acceptable.

Posted by Kira - oopsicraftmypants.com at 5:31 PM

Email ThisBlogThis!Share to TwitterShare to FacebookShare to Pinterest
Labels: resin

KIRA! I love them! The bug one kind of creeps me, but we leave them in the corners as well! I love love love the bird on the branch!