As I will be spending the majority of this next weeks time working on something very secret and very special, I'm very pleased that s fellow craftster has received her swap items that I made for her! I'll be posting these things for the next week. There's some pretty sweet crap, so brace yourself. 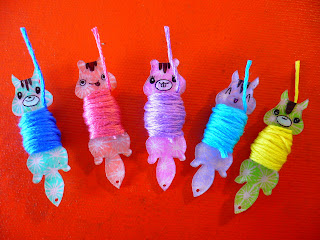 Here are some embroidery thread bobbins made to look like silly squirrels that have been KIDNAPPED and tied up! They ended up a little smaller than I had hoped, but with the shrinky sheets I have, this is as big as they come. 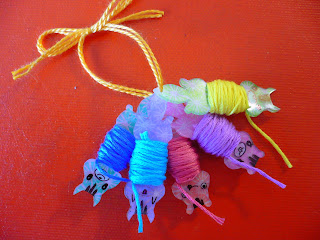 I tied em all up, and hope that they will be of use... Anyone who embroiders knows about the extra lengths of thread that are always left over when you switch colors. I guess that even though they're small, they can still serve a purpose :)

Posted by Kira - oopsicraftmypants.com at 7:47 PM

what a clever idea! i love them, they're hilarious!

Now these are flippin awesome! Man, I love you...

I've obviously missed many, many awesome projects! These are tooooo cute!